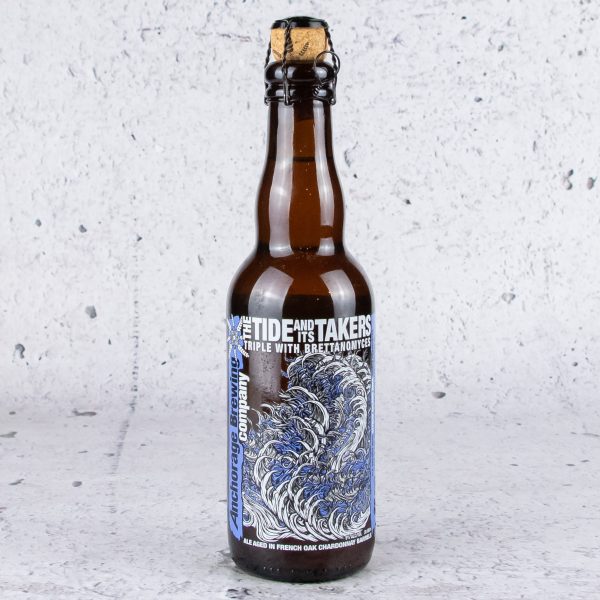 Anchorage The Tide and its Takers Triple

The tide and its takers triple with Brettanomyces. Ale aged in French oak chardonnay barrels. This is an unshored ale. Wild and Remote; there’s a beer where the sea used to be. I believe there will be many takers for this tide. It begins with a soft and spicy floral nose. The brett notes are measured and reverberate around the lemon-cream-pie hops like ripples around a buoy in a beam sea. Wood notes drift and float by and bring a bit of vanilla toward the end but mostly the wood does the important work of softening the heat of a multi-phase fermentation that is three fathoms deep. Putting a snifter of this beer up to your lips is like putting a conch shell up to your ear. Living right up against the Atlantic Ocean here in Delaware nothing says welcome home to me so much as the rhythmic crashing of an incoming surf on land and I get that familiar feeling while drinking The Tide and Its Takers. Like a powerful ocean, you cannot take this beer for granted. It’s complex, it has a lunar-pull that makes you reflexively go for the next sip, and it puts you in the right mood to appreciate life and nature’s bounty. To paraphrase folk-punk Michelle Shocked, You know you’re in the largest state of mind in the union when you’re anchored down in Anchorage. Cheers! – Sam Calaglone, President & Founder of Dogfish Head Craft Brewery