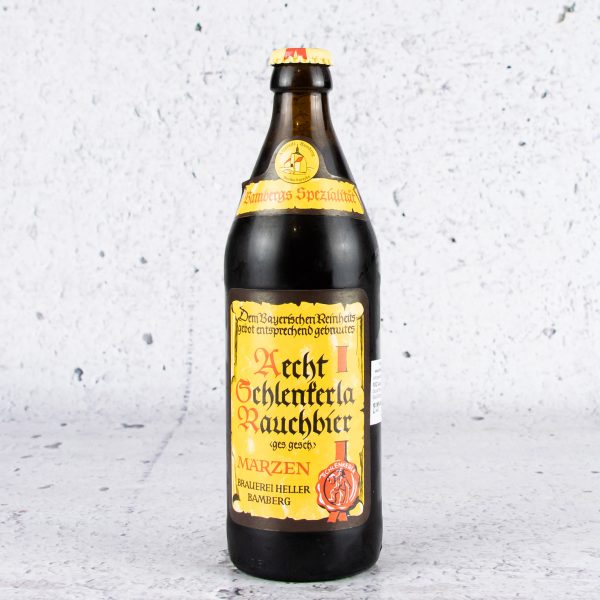 The original smoked beer and Bamberg’s specialty for centuries. A dark bottom-fermented lager beer, brewed with 100% smoked malt from the Schlenkerla maltings.

In the middle of the old part of Bamberg, directly beneath the mighty cathedral, one can find the historic smoked beer brewery Schlenkerla. First mentioned in 1405 and now run by the Trum family in the 6th generation, it is the fountain of Original Schlenkerla Smoke beer (in the German language it’s called “Aecht Schlenkerla Rauchbier”). The smoked beer is here at the brewery tavern still being tapped directly from the wooden barrel according to an old tradition.

Smoke beer from Schlenkerla is a dark, aromatic, bottom-fermented beer with 13.5 per cent original extract, which is equivalent to an alcohol content of 5.1 per cent. No doubt: there are stronger beers, but nevertheless, one should not underestimate Aecht Schlenkerla Rauchbier, it can make you Schlenker quite a bit. Its smoky flavour is being achieved by exposing the malt to the intense, aromatic smoke of burning beech-wood logs at the Schlenkerla-maltings. After mixing it with premium-class hops in the brew, it matures in 700-year-old cellars, deep down in the hills of Bamberg, into a mellow magnificent-tasting beer.